Leo Tolstoy and his Yasnaya Polyana 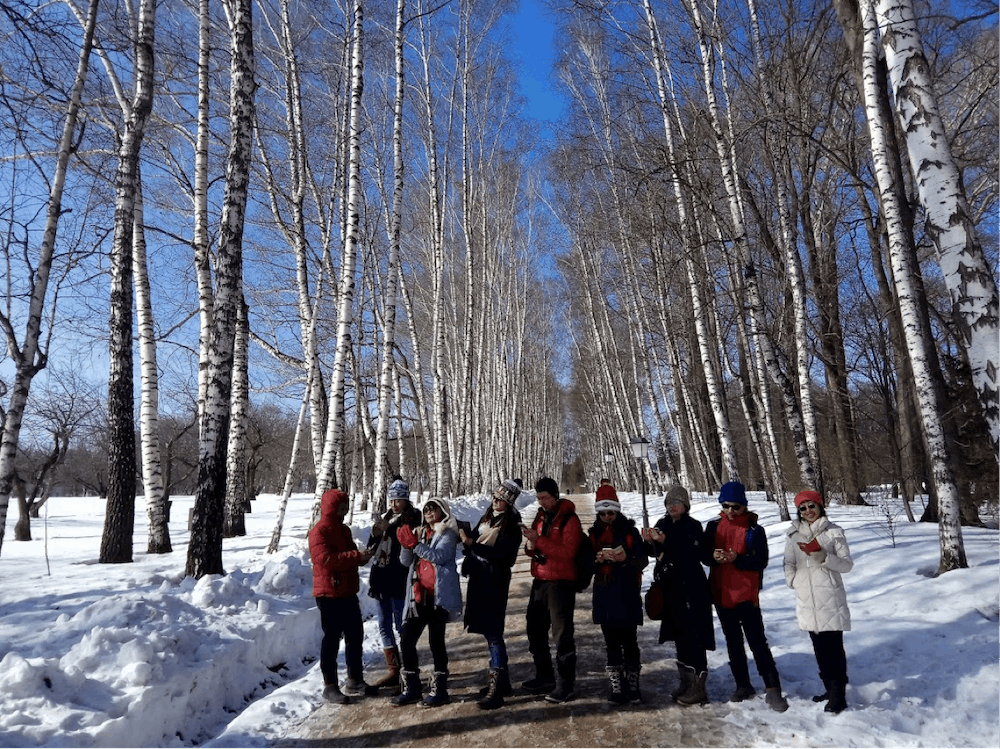 “As long as there is life, there is still happiness”

Two weeks ago, a group of Taiwan tourists tried our newly organized tour to Tula and Yasnaya Polyana for the first time. Let’s travel together with our tourists to this wonderful place and discover some interesting facts about Russia, Russian literature and Leo Tolstoy.

We left Moscow early in the morning, covered 200 kilometers by train and reached our first stop – Yasnaya Polyana. First of all, we visited a café in a traditional Russian style, where we had homemade pies with different fillings. Soon after the break, a local guide joined us and our quest in Yasnaya Polyana began. 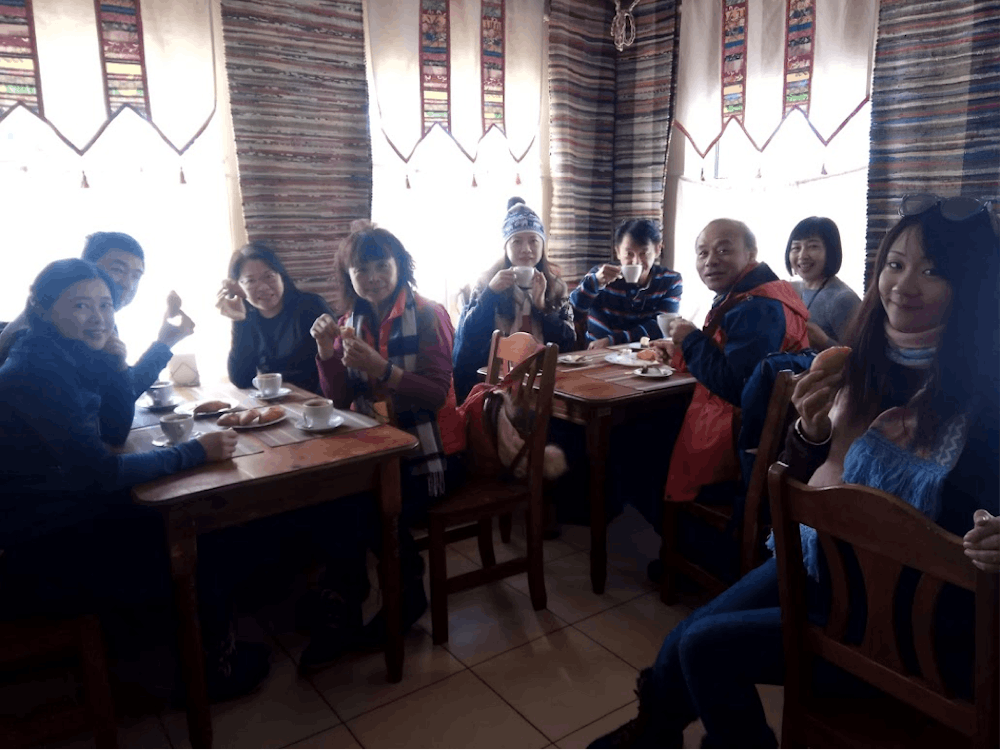 So, what is Yasnaya Polyana famous for?

Dating back to the end of the 20th century, Yasnaya Polyana is a four-century-old manor house that was owned by Leo Tolstoy. His novels, such as “War and Peace”, for instance, are included in school compulsory program not only in Russia but in some other countries as well. But, have you ever heard that Tolstoy was born in a very rich aristocratic family or that he used to be a school teacher for peasant children? Yes indeed, the life of Tolstoy was full of surprises as our group of tourists found out.

Strolling in the park, we were able to observe buildings that date back to Leo’s grandfather’s time, such as the greenhouse and two guesthouses, for example. He also built the big main house, where Leo Tolstoy was born, but we could not see it because it was not preserved and our guide explained what happened to it through the thrilling story of Tolstoy’s life.

Leo (Lev Nikolaevich) Tolstoy was born on September 9, 1828, in Yasnaya Polyana. Father of Leo Tolstoy, Nikolay, belonged to a very noble and wealthy family, which originated in Peter the Great times (18th century), but lost all family money when he was young. Mother of Leo, Maria Volkonskaya, was from an aristocratic and very rich family, who owned Yasnaya Polyana. Unfortunately, the parents of Leo passed away very early: his mother and father died when he was just two and nine years old respectively.

Maybe that was the reason why Leo was trying to find his place in life for a long time. Firstly, he studied eastern languages at Kazan University, then he changed his mind and started to study the law, but faced problems with history (once he was even punished for low grades). Not surprisingly, he left university without any degree. However, one of Tolstoy’s student time biggest achievement was that he started to write his diary, that gave him inspiration later when he became a writer.

After the academic failure, he took part in the Crimean War (1853-1856) as a soldier. During that time he tried to start issuing his own journal and even had to sell the main house in Yasnaya Polyana, where he was born. The journal was not a success and he never pursued further military service. Nothing seemed to be going in Leo`s favor.

Leo finally came back to Yasnaya Polyana, organized living space in the small and simple guesthouse (as far as the main house was sold) and lived there a major part of his life. He died at the age of 82, unfortunately, not in Yasnaya Polyana, but far away from family and home. However, he was buried on the territory of the manor house, and it is possible to visit his grave even now and some of our tourists did it. 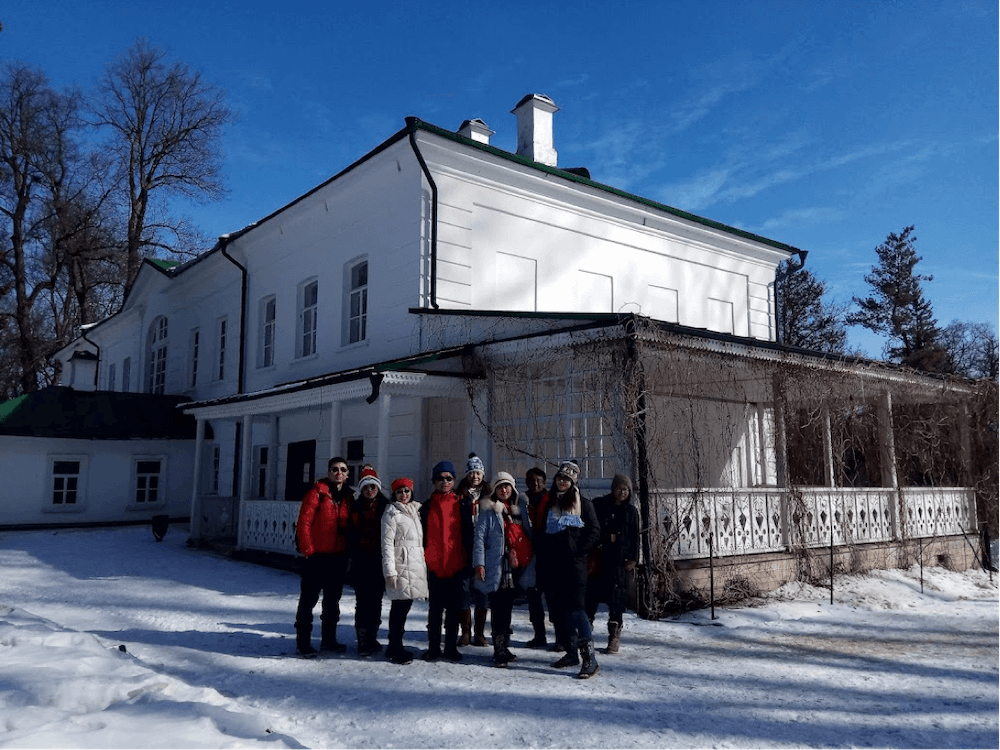 Guesthouse, which was transformed into Tolstoy main house

Everything in the house was preserved after his death by his wife, even the smallest items of Tolstoy’s everyday life. We visited the room, where Leo slept, saw his private library and rooms (oh, how lucky we were!), where Leo was writing his novels. On the first floor of Tolstoy’s house, our guide showed us the room, where he wrote “War and Peace”. All of us were so amazed by the simplicity of the room! Just a standard table, chair, and scythe hanging on the wall. As our guide explained, Tolstoy was obsessed with the idea that he and his family lived too luxuriously. He wore simple peasant clothes and loved to cut the hay together with the peasants; it brought him inspiration. And indeed Tolstoy’s house doesn’t have the aspect of the rich man’s house. It looks very simple but cozy. On the second floor of the ex-guesthouse, we saw another room, where “Anna Karenina” was created. Tolstoy liked to work in different rooms, a strange habit of a talented person. This room contains some interesting original things, such as book of Dostoevsky “Brothers Karamazov” on the table (Tolstoy had just left it this way before leaving Yasnaya Polyana in his last days), phonograph (one of the first audio recording system; a personal gift from Thomas Edison), books on the shelf and pictures of family members and friends. And after a short story of this room, a miracle happened. We heard the real voice of Tolstoy, who was speaking from the phonograph. He recorded audio to the peasant children, instructing them to behave and study well. That amazing voice created a warm filling in our hearts, as though he had just told us the biggest mystery of the world and now we knew it.

Also, we were lucky enough to see Leo’s priceless personal library (more than 5000 original books in different languages, included in the UNESCO list). He collected these books mainly while writing “War and Peace”. Tolstoy wanted to be historically accurate in his novel, so he read a lot of history books dedicated to the Patriotic War of 1812. Now we know that we can completely trust his books.

Among other rooms, we also saw Leo’s private bedroom, which is also very small, without any decorations.

The second guesthouse school for peasant children was organized by Leo Tolstoy and he even taught gymnastics and mathematics there (and children loved him so much!). We saw a caricature made by the students, portraying Leo Tolstoy teaching gymnastics in a funny way. This picture is unique and even impossible to find on the Internet, one has to be there to see it! In addition, we saw copies of Tolstoy’s original handwritings of “War and Peace”. Personally, I tried to read it, but it was completely impossible! The writing was opaque that even publishers found it difficult to deconvolute. Only Leo’s wife was able to recognize what was written and she rewrote the scripts.

We had a great opportunity to listen to Leo’s life story during the tour around the original park and inside the house where everything is still in the same manner as it used to be when Leo Tolstoy lived there. On the territory, there are still stables with horses, apple orchards, greenhouses and even gymnastics equipment, which was used by Tolstoy very actively. Tolstoy’s house is open for visitors only in the organized groups, but it is definitely worth the experience.

Many years have passed since Tolstoy’s death, yet even now everything in Yasnaya Polyana is filled with an atmosphere of unbelievable calmness. The walk through the quiet alley of birch trees created a sense that just in a moment a man with silver hair, long beard, and wisdom in his eyes would appear from a small but cozy house where he spent his best years. This tour inspires you to reread or start reading Tolstoy’s novels if you haven’t had such an opportunity before! 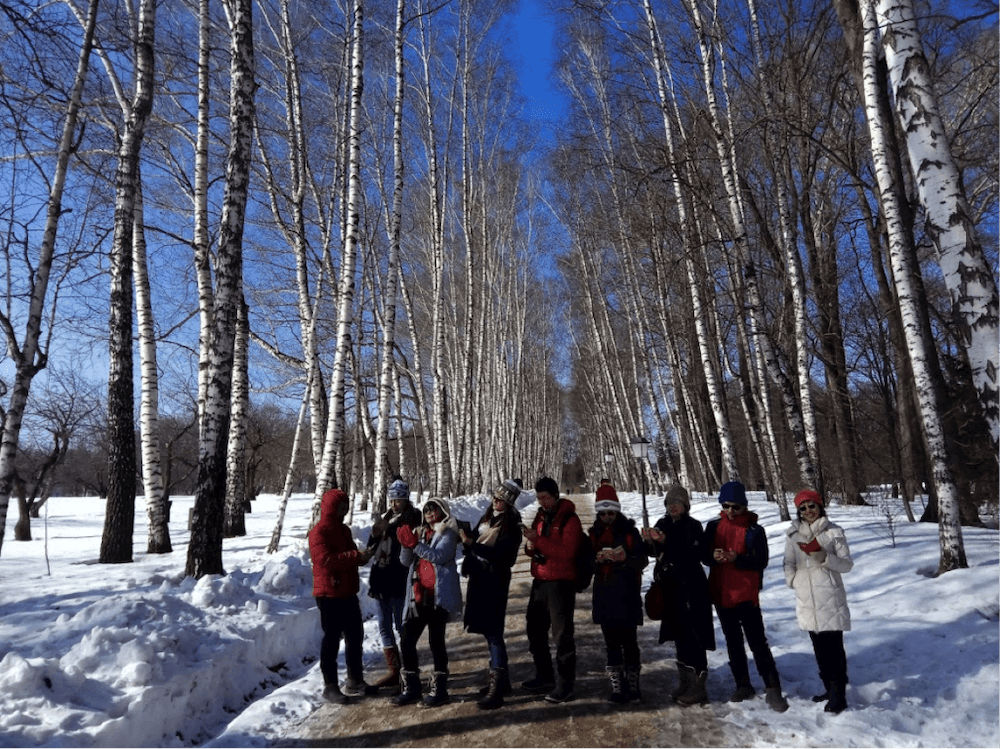