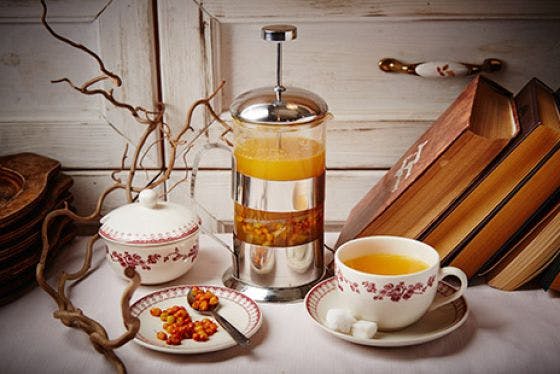 The History of Tea in Russia

Tea consumption in Russia began in the first half of the 17th century. There are some documents that Russian tsar Mikhail Fyodorovich Romanov received several boxes of tea as a gift from Chinese ambassadors in 1618.

Like in France, tea became popular in Russia first of all as a healing drink, but soon began to be used simply for pleasure. By the middle of the 17th century, it was already possible to buy up to ten varieties of tea in Moscow, and in 1679 an agreement was signed with China on its regular supplies. Almost all the tea imported from China came to Moscow, where it was sold along with other goods and was widely available despite a high cost.

Land transportation (exclusively by horse-drawn transport) was the reason for the high cost of tea in Russia. From the Chinese border to Moscow, the tea wagons traveled about 11000 km, which took up to six months. In addition to the duty of 80-120% of the purchase, the price was charged by the royal government.

The situation changed dramatically only in the second half of the 19th century when the delivery of Cantonese tea began by sea. Moreover, the opening of the Siberian railway in the 1880s drastically reduced the time and transportation cost of tea delivery. The same period was also characterized by the first tea deliveries from India and Ceylon – this tea was delivered by sea to the port of Odessa. The price of tea declined and its consumption was massive. At some point, Moscow merchant Perlov opened the first tea house in Moscow which is still functioning! During our Evening Drinking tour, we are visiting this legendary place. 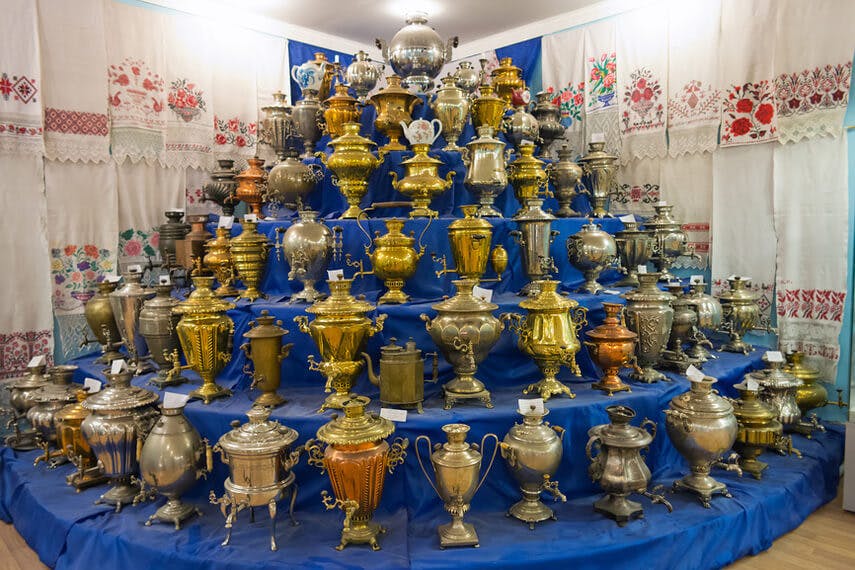 The development of tea consumption contributed to the rise of those industries that were associated with the tea trade. Thus, in Tula, samovar production became more popular: if in the second half of the 17th-century samovars were produced almost individually, then by 1850 there were 28 samovar factories in Tula, the total output of samovars reached 1200 pieces a year.

First samovars functioned with wood or coal, later the modern electric ones appeared which actually were the prototypes of modern electric kettles. In my family, we have a samovar and have a tradition to gather around it for holidays or some home celebrations.

Drink from a Saucer! 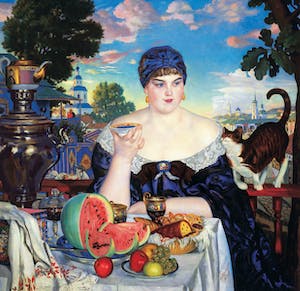 Tea consumption in Russia had been constantly growing. By the 19th century, all social classes started to drink it. In the period of 1830-1840, Russian statistics noted that in the areas where tea consumption was growing, the interest towards strong alcoholic beverages fell.

An important symbol of a Russian tea ceremony is a saucer. Landlords, merchants, craftsmen, and peasants had a habit of sipping tea from it, although among the aristocrats this habit was considered extremely vulgar. A teacup returned to a saucer meant that tea was no longer needed. An inverted glass in the poor class and a spoon left in a cup among the nobility also meant that the ceremony was finished. Each aristocrat family had its own tea room where they could organize Russian tea parties.

Next time you’re at a Moscow Underground Tour with us, make sure to try the most consumable drink in Russia, which is tea, and maybe have it from a saucer together with homemade Russian pies. 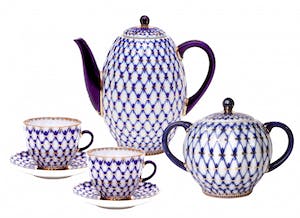 Tea sets became a part and parcel of every house – a dream and pride of any Russian hostess. In the 17th century, the British learned the secret of porcelain, and tableware production started everywhere across Europe. At first, the price for it was too high but dropped soon enough, and almost all people could afford European porcelain.

The production of Russian teaware was influenced by Empress Elizaveta Petrovna in the mid-18th century, who ordered to establish an Imperial Porcelain Factory in St. Petersburg. Very soon during the reign of Catherine the Great, it began to make excellent family tea sets, which had high quality, not worse than Asian or European ones.

Even today most of the Russian hostesses have a tea set for 6-12 people (sometimes not even one!) at home, rarely used but exhibited in a sideboard. 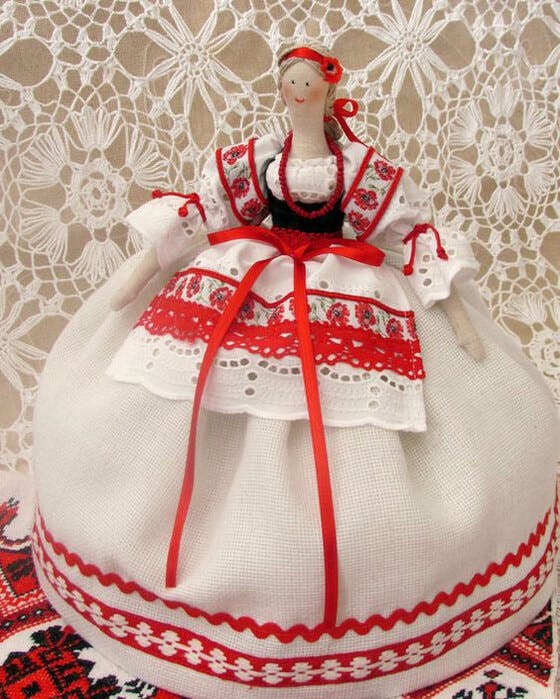 One of the most famous table decorations in Russia is a doll in a teapot called “baba”. “Baba” is a special hot-water warmer made in the shape of a woman in a lush, bright skirt. The skirt is used to cover a samovar top waiting for the tea to brew, and later – a teapot. By the way, nowadays “baba” can also be used – so the drink will retain heat longer. 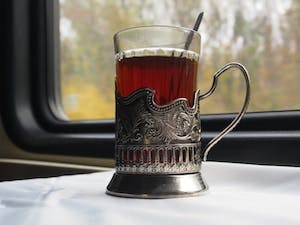 In the Soviet time, the main tea accessory was an iron cup holder, although it appeared much earlier. A purely functional thing later turned (like a samovar) into an art object. The cupholder was covered by a variety of patterns. The one which first appeared in the 17th century was originally wooden. It was intended for intelligent men who, according to the fashion of that time, preferred to drink tea from glasses. Subsequently, the cup holder became more expensive and elegant (and made from silver), only later it was replaced by a cheaper metal version. Now, this functional device can be found on the trains –  the tradition of drinking tea from a glass in a cup holder has been preserved there. Btw, it’s a perfect souvenir to bring back from Russia!

During our Yasnaya Polyana and Tula tour to Leo Tolstoy’s estate, you’ll have plenty of opportunities to drink tea like a real Russian: in a train from the famous cup holder and in Tula (motherland of Russian samovars) you’ll feel true Russian hospitality and drink Russian tea made in samovar together with jams and bagels. The main rule here: take your time and enjoy – never hurry up with tea. 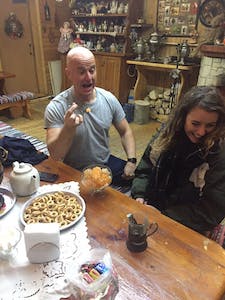 Of course, the attitude to tea and traditions have changed since it appeared in Russia, but love for it remained the same. In modern Russia, it’s the most beloved drink during our long winters to keep warm and in summer to quench the thirst!

In big cities like Moscow or St. Petersburg, you’ll find many tea houses where different tea ceremonies are offered. In every restaurant or café, you’ll find many types of tea from ordinary black or green to white, fruit, herb, puer, etc. It is a requirement for every café to follow the trends and offer a variety of teas. If you’re a tea lover, Russia is the best place to enjoy this drink and its varieties.