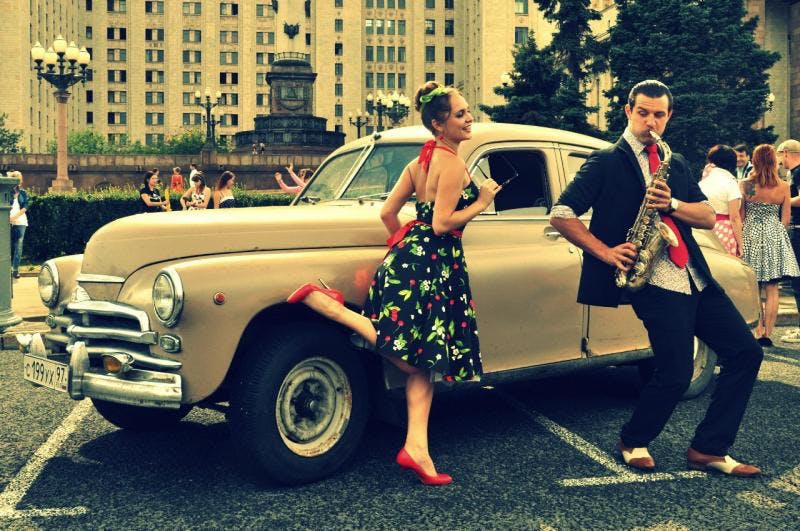 Legendary Broadway street full of attractions, theaters, office buildings, is the oldest, the longest and probably the most known one in NYC. Broadway is also a symbol of American art thanks to its Theater District, the abundance of exhibition halls, cabarets and other entertainments. Would it be surprising to know that Moscow has its own Broadway too? 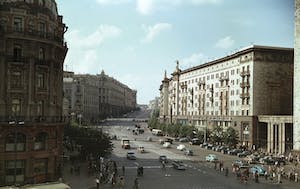 Literally “broad way” (“Breede Weg” from Dutch) means a wide street in a city, and Broadway for sure used to be the widest since the arrival of the Dutch on Manhattan (17th century). They also gave the street its current name. Broadway street violates the perpendicular layout of Manhattan, it bends in waves going across the island. Where in the Russian capital can we find an old and wide street which can be compared to Broadway? The main street in Moscow which connects 2 capitals (Moscow and St. Petersburg) – Tverskaya street – is one of the longest (it changes the name on the way) and the oldest, and, in my opinion, historically it has much in common with Broadway.
Today Tverskaya street looks like a highway with 3 lines of cars flying in each direction. It’s wide enough for marching component vehicles to Red Square on Victory Day (May 9) every year. But only a hundred years ago it used to be a narrow wandering medieval street.
In 1930s a global reconstruction was started in the whole city – a Soviet capital needed to get a festive, “parade” look with wide and straight streets, massive and impressive facades of the buildings. Tverskaya street was the first one to be renovated, once the royal power was overthrown. You can learn the details of the amazing process of “widening” the street at our Moscow Behind the Icons and Total Moscow Tours. Nowadays Tverskaya street is really straight and “broad” and the architectural style of new buildings combines pomposity, luxury and monumentality.
In fact, Tverskaya is often called “Russian Broadway” not only because of its location, length and architecture. This name was given to Tverskaya by the representatives of subcultures, who always enjoyed spending time there. 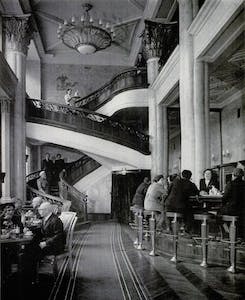 Before WWII the first night club “Cocktail Hall” was opened in Soviet Moscow for rare expats and domestic elite in Tverskaya street, 6. It was a small piece of the West in the center of Moscow. During the wartime, frequent visitors of the “Cock” (aka “Cocktail Hall”) were the officers who came on leave, and who received huge cash bonuses for a downed aircraft or a burnt tank.
After the victorious fireworks finished, the place of the officers was again taken by the “spoilers” and other dudes who had joined in. The “Cock” quickly became a cult point: firstly, it worked until 5 am, and, secondly, forbidden at that time jazz music was played on the second floor.
Prices in the Cock ranged from rather affordable to exorbitant (e.g., they say, “the Carnival” cocktail was considered the most luxurious, it consisted of several layers of liqueurs and cost about a hundred dollars if converted to modern currency rate).
There was a queue to get inside and a face-control person named Kolya, who strictly checked the looks of the visitors. Some pretended to look like foreigners, others to be stylishly dressed. 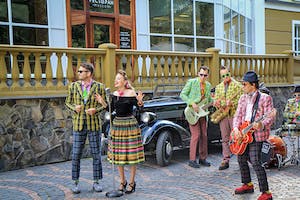 After WWII in 1950s, a famous “Cock” became a mecca and a center of gravitation for different sorts of dudes, who gained a name “stilyagi” in Russian.
The word “stilyagi” first appeared in a satirical magazine “Crocodile” in 1949. The author of the article was making fun of strangely looking dudes. He described in detail how to dress, how to behave and what music to listen to be a true “stilyaga”. Before this article, the dudes themselves used to call each other “shtatniki” (which meant “related to the States”) as they adored American pop-culture and by all means tried to look “western”.
The word “stilyagi” itself comes from the restaurant musicians’ slang whose word “stilyat’” (a  combination of two English words: “to steal” and “a style”) meant to play in a strange, borrowed manner. 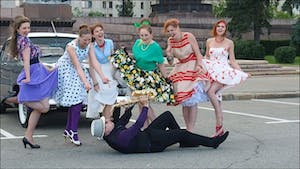 To detect a real “stilyaga” among equally dressed soviet citizens was not that hard. Soviet fashion was very simple and boring, all the clothes were bought in the same shop, mostly of grey and brown colors. Stilyaga was dressed completely different:

Looks: bright checked jackets with shoulder pads, narrow ties and pipestem trousers for boys; bright skirts, red lipstick, painted arrows on the legs to look like tights for the girls. Such clothes were either hand-made or bought secretly from the dealers in the streets.
Hair: with a parting or “Elvis peaks”.
Words: special slang including some American words.
Dance: a mix of boogie-woogie and shimmy, jazz. To buy musical records was really hard as they were in deficit (after WWII a campaign against “cringing to the West” was developed in the USSR), often the music was recorded and spread around on X-ray pictures!
And the main pastime for “stilyagi” was a famous “walking down on the Broad” – showing off “stylish” yourself to friends and everyone around.
No doubt the manners and looks of “stilyagi” were far beyond from what a proper and reliable Soviet citizen had to look like. They provoked and irritated, were chased by police, education officials, and by ordinary citizens themselves, their names and nicknames were reported on meetings (and sometimes they were even expelled from universities). But being young and bold they enjoyed the game. 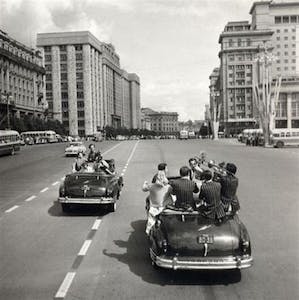 It is considered that the International Youth Festival of 1957 gave a special impulse to the dudes but in fact it dispelled the myth and destroyed subculture.
It turned out that “there are no dudes in America”, and real Americans were simple guys, dressed in strange blue trousers (a magic word “jeans” hadn’t been known yet in the USSR), but on whole, they look discreet, had short haircuts and not everyone listened to jazz. After the festival was over, “Broad” died down, and a “stylish” appearance started to betray a provincial.
The next generation which came to Moscow “Broadway” consisted of rock-and-rollers, who called Tverskaya just the “Street” and despised “white and fluffy” stilyagi. The “Cock” was forgotten and the main gravitation point was moved to Pushkin Square.
If you want to travel back in time and to see where the legendary “Cock” was located, we invite you to our Moscow Behind the Icons Tour!