All you need to know about Orthodox Lent and Easter

Pancake Week has come to an end. We gained some weight eating delicious pancakes with caviar and jamming them with sour cream. We burned the straw figure of Maslenitsa on fire and hope that this pagan ritual will bring us good luck for the rest of the year. 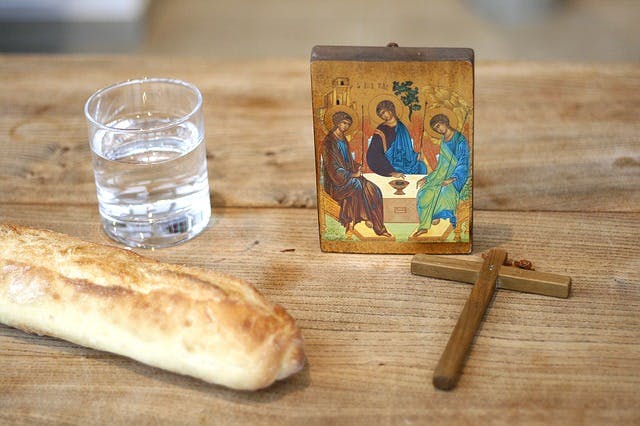 Why does orthodox lent last for 40 days?

After feasting comes fasting, and I literally mean it: on March 2, Russian Orthodox Lent starts. It’s the most important lent for Orthodox believers. And it’s also the longest- people will follow a strict diet for a 40-days period. Forty days are to acknowledge forty days fasting of Christ the Savior in the desert and prophet Moses fasting.

What are the main rules of Orthodox lent?

According to the norms, during the Lent religious people are to eat once a day on weekdays. The food should be simple – bread, vegetables, and water are allowed. On Saturday and Sunday, people can afford to eat twice a day and drink a glass of wine, a symbol of Christ’s blood. Meat, milk, and eggs, as well as strong alcohol, are strongly prohibited for Orthodox believers during Lent because they make it harder to concentrate on spiritual matters.
Also, by shunning from favorite food a fasting person learns to fight self-indulgence. As Church teaches, abstinence leads to higher moral standards. Resuming, during the 40-days Lent religious believers are expected to: show kindness to family and strangers, eat simple and local and care about those around. Among the “don’ts” there are arguments, alcohol and meat consumption, endless Internet surfing, whims, addictions, and a fad. Simply speaking, the “don’ts” respond to seven deadly sins: lust, gluttony, sloth, greet, wrath, envy and pride. These prescriptions make sense, don’t they? In the end, if you maintain a lifestyle of a modern responsible person, you strive to be kind and just, and also to consume meat and alcohol wisely. 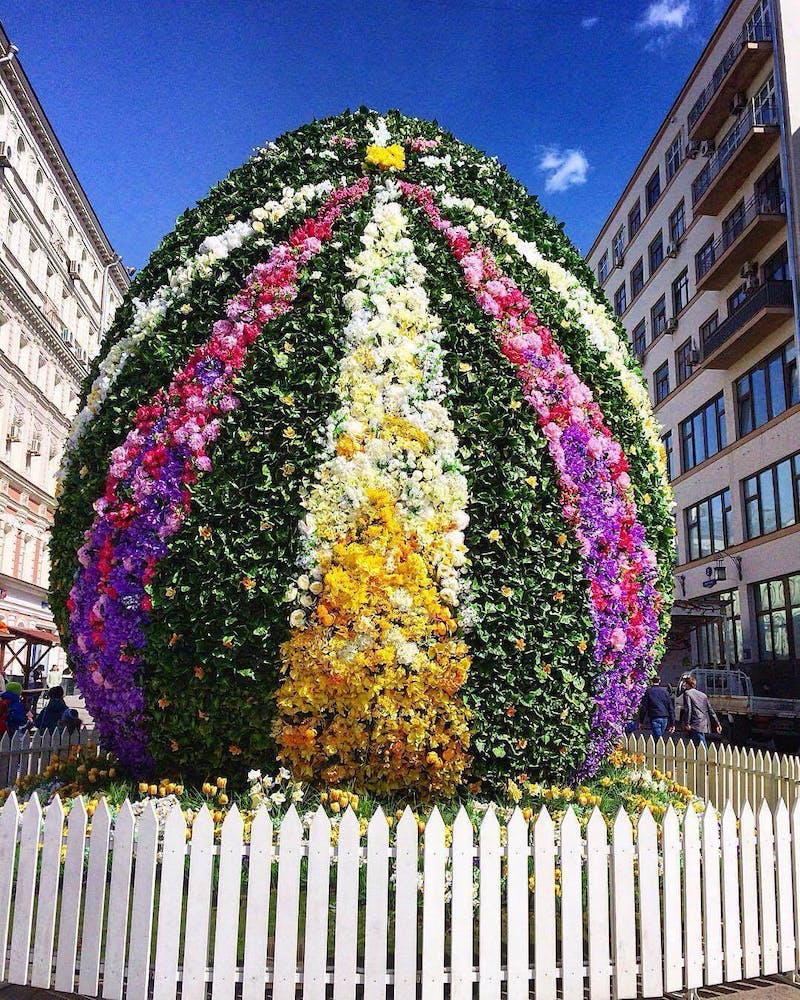 When is Russian Orthodox Easter in 2020?

When the Lent is over, and people slowly rebuild their diet back to fats and protein, one more holiday is at the doors. Right the next day after Great Lent, in 2020 it’s on April 19, Moscow and the rest of Russia celebrate the Russian Easter. Orthodox Easter is the biggest holiday for the Russian church. It’s a day of Resurrection of Jesus Christ
from the dead. It’s one of the most favorite holidays of Russian people, young and old because it’s a break from fasting and penance and it’s obviously a significant day for those who believe in God. Besides, Easter often means meeting friends and family; there is a light mood in the air and fine dining on the table.
Before Easter, traditionally on Thursday, Orthodox people tidy up the house and clean up. The sacred day should be spent in cleanliness and order.
On Easter Eve people go to the Church, to pray at a Midnight Mass and to bless willow switches, and most importantly-chicken eggs and Easter bread that they are going to eat in the morning.
Easter bread and boiled dyed eggs are two dishes that must be present on the Easter menu. Back in the past, Christians celebrated the holy date with meat and different kinds of a bakery.
To expand a bit about the foods and tell you more about Slavic Eastern traditions, there are two kinds of Easter bread. 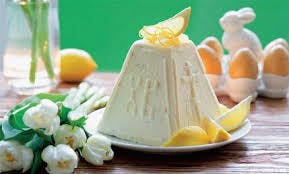 The very traditional “bread” is called Paskha and it’s made of curd cheese, eggs, and butter. Some candied fruits and almonds can be also added, as an almond tree is a symbol of resurrection. Paskha has a very delicate structure. It tastes like a cheesecake or a curd snack. And every bite of it is better to be eaten on Easter day- since the ingredients are raw and natural, it’s safer and more tasty to eat it fresh.
However, the bread that you will find in every store will be different and will actually remind you of a familiar loaf of white bread. It is the second type of Easter bread, called Kulich. It is a baked good, with raisins and thin white icing on the top. If home-made this Easter bread is not sweet- Lent has just ended, and you’re not meant to attack the sweetest, richest food at once. At shops this bread will be sweeter, almost as European Christmas bread, sometimes with vanilla or citron flavor, often- with decorated wrappings. 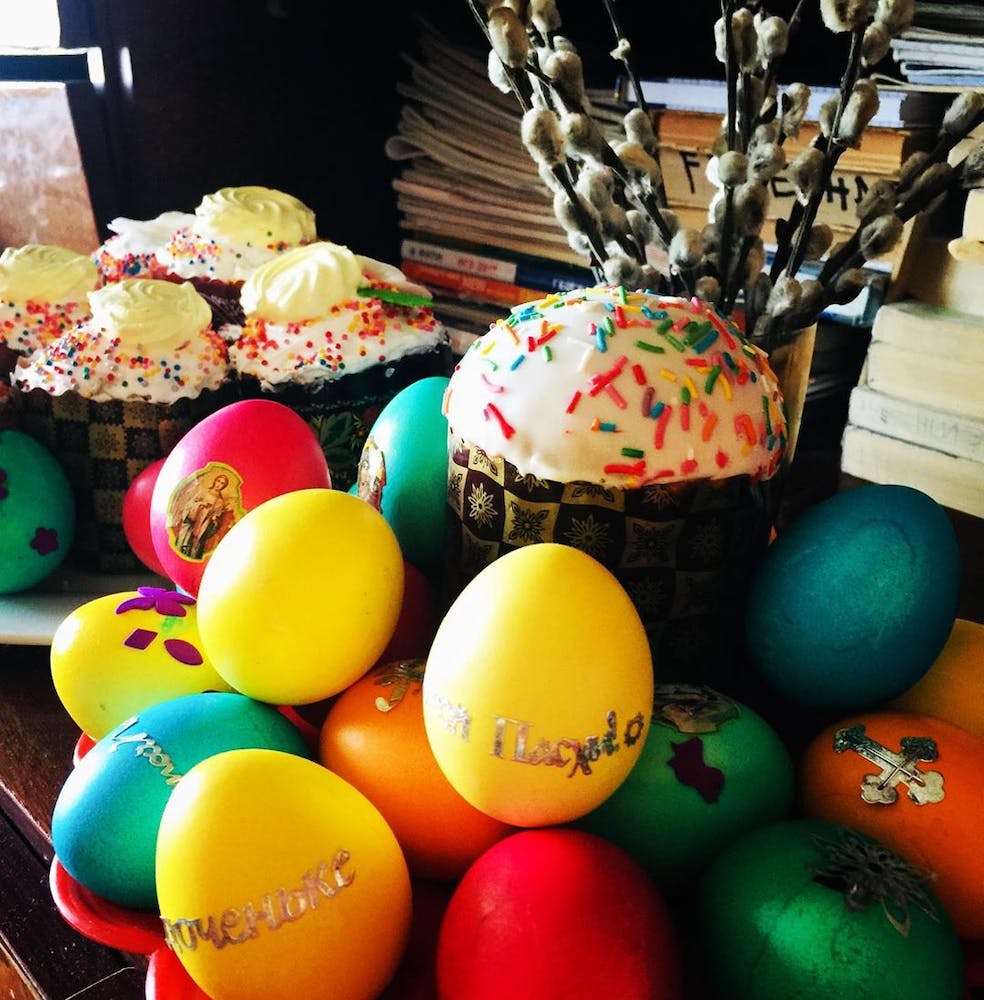 The dyed eggs are also an obligatory part of a ritual. One takes an Easter egg from a plate, holds it and taps the egg that is held by someone else. The aim is to break the shell of the other’s egg but not of yours. When tapping the eggs, both people greet “Christ is Risen!” ( “Христос Воскресе!») After this saying, you may eat the food.
While in Western Europe an Easter bunny is a traditional Easter present for children, in Russia the main
present for Easter is… No, not a Russian doll! It’s again the Easter bread and colorful Easter eggs.
Expensive presents are not encouraged on Easter Sunday.
The same set of Easter snacks can be taken at work for a coffee break with colleagues, or for a family
visit. Exchanging colorful eggs, people kiss three times and tell the good news of the day to each other – “Christ is Risen!”

The history of Faberge egg

However, there were several dozen of special cases when a person gifted more than a simple egg to his loved one. In1885, one man presented an exclusively decorated golden egg with a surprise inside to his wife. When the golden, covered with white enamel, egg opens, inside you see a small gold hen set with ruby eyes. 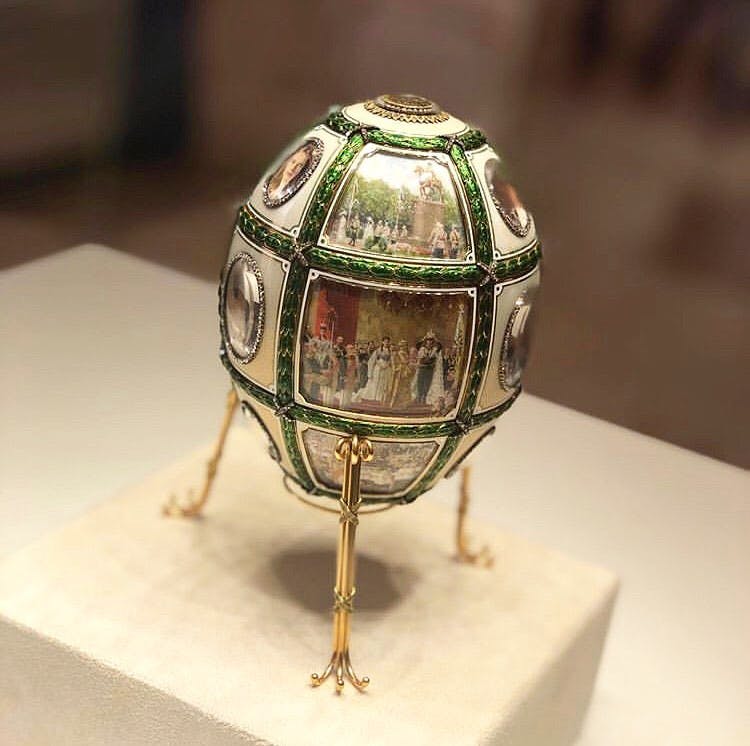 That first egg, crafted by Faberge, is now called “The first Hen Egg” and it is kept in Faberge Museum in St Petersburg. And that man was a Russian Tsar Alexander III, who ordered to make the egg for his dear wife and the Empress Maria Fedorovna. The Imperial Family and their ancestors liked the Faberge egg so much that after the Jeweled Hen egg Faberge and his masters created more than fifty jeweled eggs, each with a unique surprise inside. Most of them are still preserved in the Faberge Museum in St. Petersburg.
Now you know why Russian Orthodox lent lasts for 40 days and you also read about when Orthodox Easter is in 2020. Hopefully, you will have a chance to celebrate Easter with us in Moscow! Although it’s mainly a family holiday, Moscow city prepares a public program for guests and citizens. You can join games and cooking master-classes in Tverskaya Street, donate money for a dog’s shelter and listen to men choirs in the main churches of the city. We bet you will be amazed by Easter art-objects that appear in Moscow streets in spring.

Moscow Urban Adventures team is happy to help you with other ideas on how to spend Easter day in Moscow, don’t be shy to write to us! Or have  look on our tours in Moscow, guided by the locals

Get ready to eat like a Russian on this delicious food tour at the Danilovsky market in Moscow. Moscow food tour – is the best way to explore traditional Russian cuisine. Explore the local market…