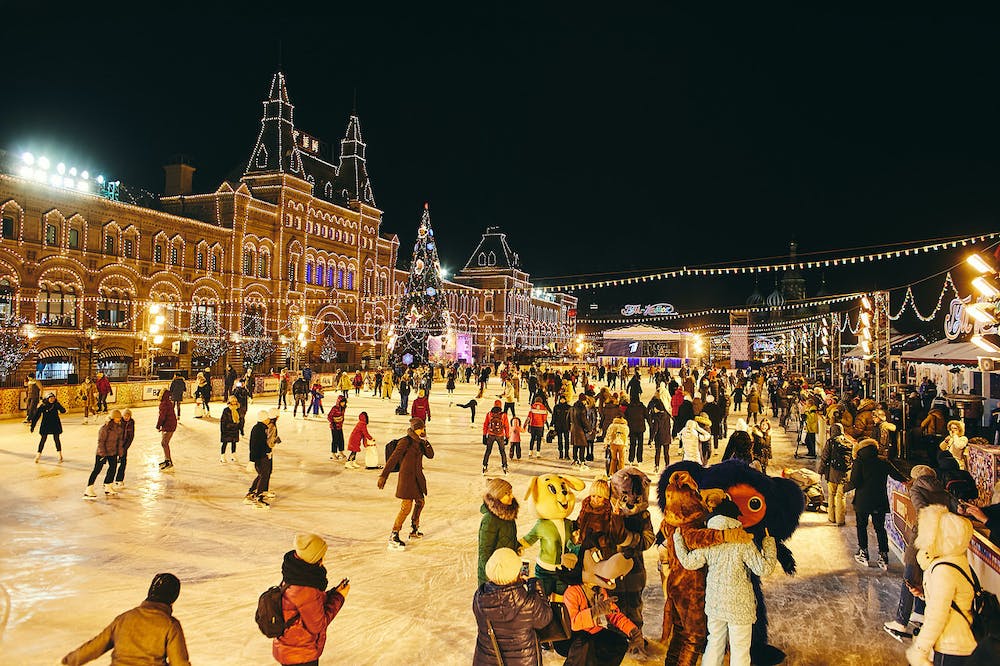 First winter lights are already hoisted on the trees, and New Year sales are soon to come. Although we enjoy choosing Christmas presents for significant other, there is another big expectation from winter. Outdoor skating is what we all breathlessly wait for! Warm gloves, a woolen scarf and a pair of white skates-this is an exciting winter image! Moscow is ready for the ice skating season.

Unlike Siberian cities, the capital can’t boast a large quantity of snow. A proper snow layer will be there in January, and it will melt out before March. Russians may not be listening to Greta Thunberg’s speeches but we do witness the effects of global warming here in Moscow. Luckily, technologies made it easy for everyone to slide and skate even when it’s 0 oC outside. Even if you have never stood on skates, you will be charmed by the atmosphere of celebrations and join in ice dance. The previous year, there were 23 ice rinks open in city parks, let’s see what the coming winter prepares for us. Here is the list of the most popular ice rinks in Moscow:

GUM rink at the Red Square 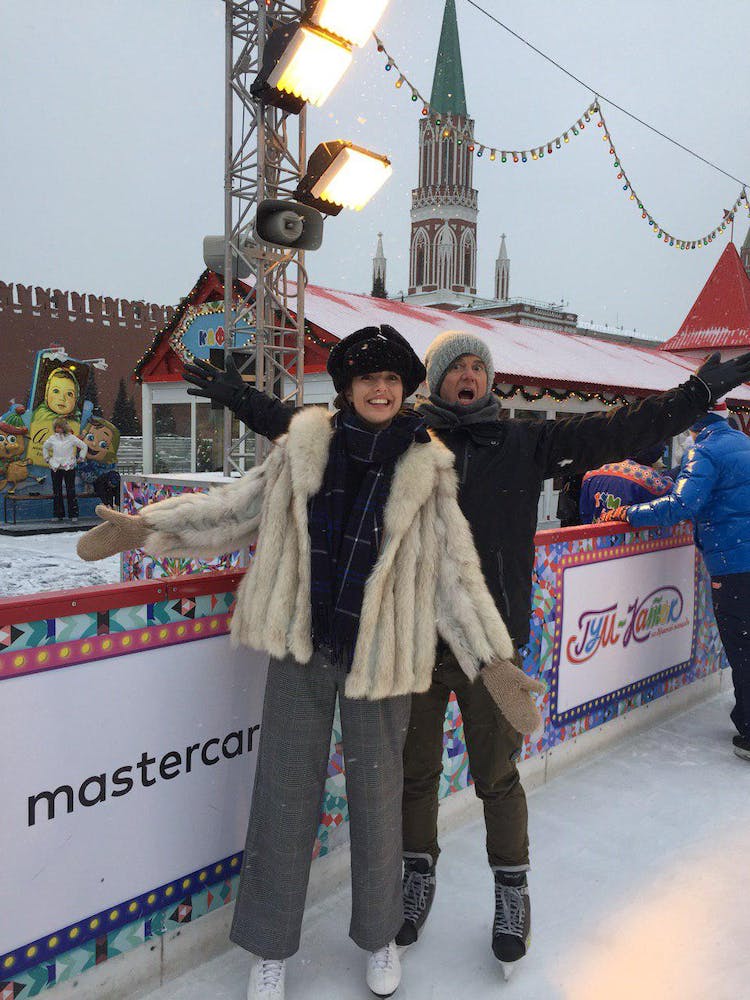 The most beautiful ice rink to open is the GUM rink at the Red Square. It’s covered with artificial ice which is cleaned every several hours. Popular songs can be heard from the loudspeakers, Christmas booth are 200 meters away, and sparkling GUM is right in front of your eyes. “C’est tres Magnifique”, as our French friends would say. If you are a fan of winter sports, you can be extra happy because every week the GUM rink offers ice skating lessons led by famous figure skaters and hockey players. 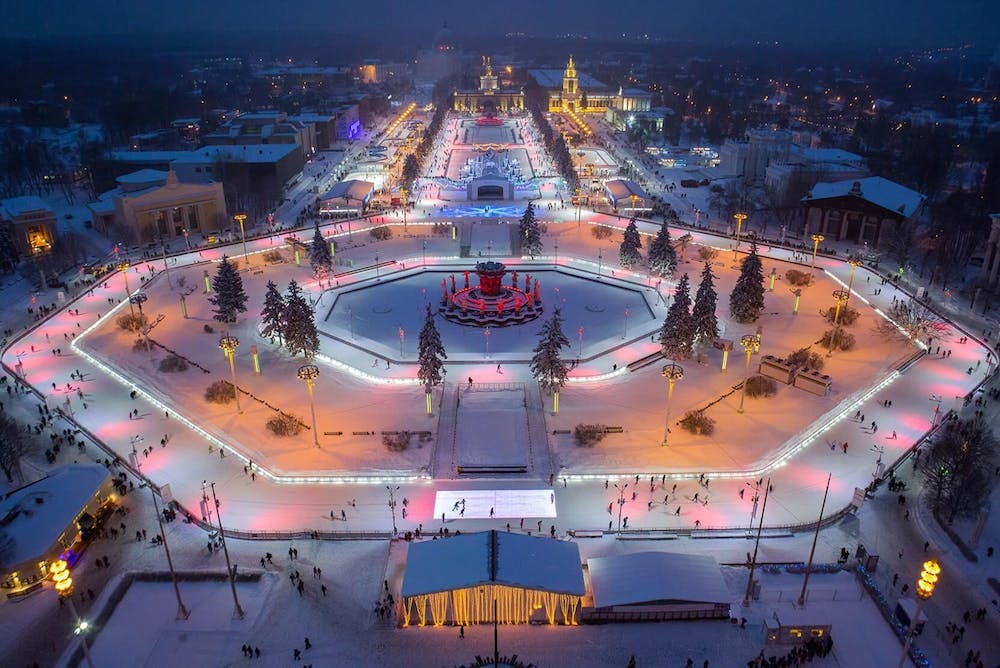 Be it summer or winter in Moscow, a general rule is to visit the former Soviet VDNKh park. On the Christmas holidays, there will be evening shows and animation for kids. This year the park celebrates its 80th birthday, and to mark this special date, the park is going to host the biggest skating rink of the country. Technically, there will be 3 ice rinks. First, a small rink for pre-school kids, second, a large rink, 16 thousand sq.km, for the general public, and finally, a romantic “Alley of lovers” built around the fountain “Stone Flower”. Single or not, you won’t feel lonely in a crowd of people making rounds and rounds along the decorated trees. To feel the New Year atmosphere from different epochs, you can check three thematic zones in the
park.

When entering the park, you will cross 1950-s epoch. Aren’t you curious to see how New Year was celebrated 70 years ago? You will be invited to dance in a carnival and listen to a traditional bass band. Closer to a space rocket and a re-opened pavilion “Cosmos” there will be a 1960-s area. As you can guess, every street performance and thematic placard there will be about the Solar system, galaxies, and cosmos exploration. The main topic will be presented right in the large skating rink. It will be a reflection of a New Year holiday for children in 1970-80s. Tourists and locals can enjoy naïve and kind children songs and occasionally spot a penguin and a snowman from Soviet cartoons doing arabesque or a sit spin. 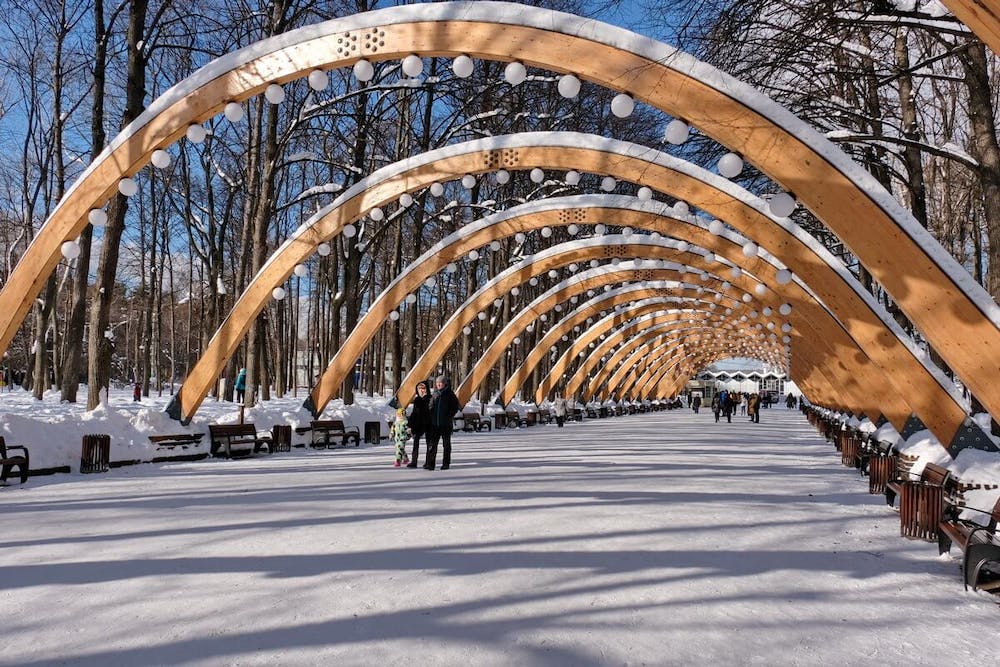 Sokolniki park is for adventurous souls who are ready to travel for 30 minutes out of the city center. It has a huge territory and can be called the green lungs of Moscow. Squirrels and rare birds live in far corners if Sokolniki in quiet nature. Similar to the VDNKh, Sokolniki offers three separate ice skating rinks. Sokolniki biggest rink “Giant” is open for everyone, and it’s easy to find: it’s the first park to the entrance. The smallest skating rink is on contrary a challenge to find, and you can figure it out by its name- “In the Forest”. Our advice is to follow the Google maps, they will save you from getting lost in a Russian forest. Both rinks have free entrance, budget travelers may appreciate it. However, the free entrance has its downsides: the skating rinks that don’t demand a fee are covered with natural ice and by the evening the ice is far from smooth. Our advice is to be there before the afternoon when the ice is still
fresh.

Whenever if want to train difficult elements of figure skating, you might want to choose the third rink, called “Lod”. It’s in the middle of Sokolniki park, close to the Museum of Winter Decoration. “Lod” has artificial ice and is fully equipped. 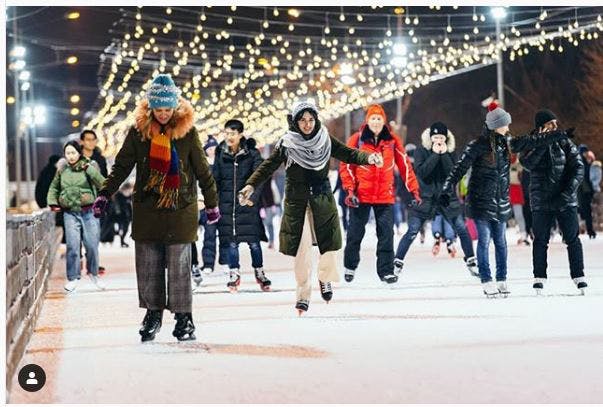 Gorky Park is another trendy area that cannot be skipped by Moscow visitors. Gorky Park has undeniably deserved a name of “a winter wonderland”. Every year organizers surprise Muskovits with a new concept for an ice-skating rink. Last year it was “A factory of happy people”, the name may sound a bit antiutopian but let’s put aside philosophy for a while, it’s time to have fun! This year’s concept is yet to be announced. We believe it will be something as original as always.

On November, 22 the Ice Rink invites everyone to participate in a grand opening party. You can bring kids and hockey fans – there will be additional rinks open for them. This skating rink is without any doubt the trendiest one with invited DJs, live concerts and collaboration with Russian designers.

Winter in Moscow is always fun! And if you never tried ice skating before- it is the right place to start! Plan your trip today with Moscow Urban Adventures! Or read about the things to explore on your own in 3 days!